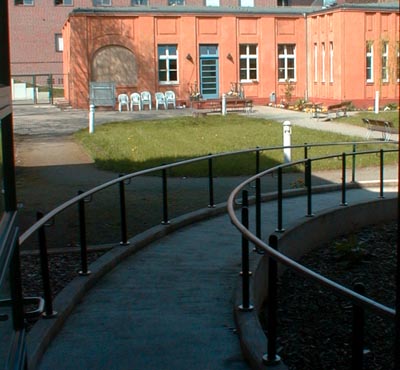 In the gerontopsychiatric ward, mental disorders in old age are diagnosed and treated. Diseases of old age, especially mental disorders, will play an increasing role in our society in the coming years.

Gerontopsychiatric illnesses can manifest themselves in different ways: they range, for example, from incipient mild memory and orientation disorders to severe brain-organic syndromes or from mild upset and dejection to severe depression.

For depressive disorders, but also for memory and orientation disorders, forms of treatment have developed in recent years that can lead to a noticeable improvement in quality of life even in old age. Treatment in our clinic consists of an individually tailored combination of medical, psychotherapeutic and social-psychiatric measures.

The decline in memory, disorders of orientation, thinking, judgement, language and planned actions are often considered "normal age development", especially when these brain dysfunctions occur in old age. In many cases, the cause is a treatable disease, which is hardly known to many of those affected and their relatives. With modern diagnostic procedures, the causes of dementia can usually be clarified and in many cases eliminated.

Mood swings, sadness, hopelessness, sleep disorders, reduced appetite, depression, loss of interest, social withdrawal, but also suicidal intentions (suicidal tendencies) are just a few examples of the signs of depression in old age. A treatment of the underlying physical causes (e.g. cerebral circulation disorders) and also a drug influence directly on the psychological functional disorders of the brain is possible in the case of depression in old age. Early therapy with mood-improving and calming drugs can be life-sustaining, for example in cases of suicidal tendencies. The term "psychotropic drug", meaning a drug that has a positive effect on the psyche, is therefore wrongly attributed in view of successful treatments. In addition, psychotherapeutic treatment procedures are also carried out, with the help of which many patients succeed in mobilising their own abilities to prevent and combat depressive symptoms. If you have any questions, please contact our geronto-psychiatric outpatient clinic: Tel.: 0391-67 13483